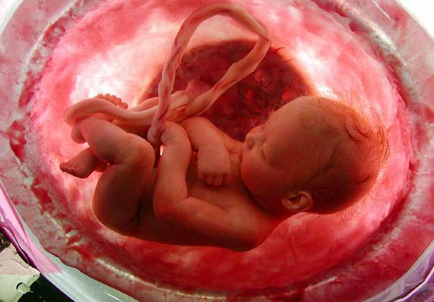 A contemporary protocol which results in zero PPH equal to or over 1000 cc has been documented since 2010. (1-5)  This protocol is based on the facts that 1.the placenta separates within the first minute after the fetus emerges from the uterus due to the change in the uterine shape and size; and 2. until the placenta is delivered, the uterus is unable to contract postpartum completely and close off the blood vessels that previously  delivered blood to the placenta

(6) “As the baby is born the uterus spontaneously contracts down on its diminishing contents. Normally by the time the infant is completely delivered, the uterine cavity is nearly obliterated and the fundus lies just below the level of the umbilicus. This sudden diminution in uterine size inevitably is accompanied by a decrease in the area of the placental implantation site.” “Most investigators have found that placental separation occurs within a very few minutes after delivery.”

(6) The textbook includes a drawing of the fundus of  the uterus below the umbilicus immediately after the baby emerges. (6)  When the placental delivery is carried out with the mother in supine position the heavy, separated, boneless placenta lays supine with its center of gravity below the cervix.  With the woman In supine position, the placenta has to fight gravity, moving upward, to be born. Without the help of gravity and/or cord traction, the placenta usually delivers slower than when gravity is used to assist in the delivery. As already stated, the uterus is unable to contract completely until the placenta is delivered.  Once the placenta is delivered, the uterus can contract if it has not filled with blood while waiting for the placenta to deliver.  “Lack of efﬁcient uterine contraction (uterine atony) is the most common cause of primary PPH.” (7)

Magann et.al. (8) found while using active management, the longer the third stage, the higher the risk of PPH over 1000 cc and the difference comes down to minutes. “For third stages of labor more than 10 minutes compared with less than 10 minutes there was twice the risk of postpartum hemorrhage. For a third stage of labor more than 20 minutes compared with less than 20 minutes there was four times the risk of PPH.”  Categories of 5 minutes or  less than 5 minutes unfortunately were not analyzed.  The data presented in Magann et. al. as well as in the large body of literature on the subject all find timing to be a more important factor than Pitocin administration, however, this is rarely stated outright.  Magann et. al. concluded that PPH rates were related to the use and timing of Pitocin. This commonly held view that Pitocin in the key factor in preventing PPH conflicts with evolution. Birth without PPH evolved in the absence of synthetic Pitocin. Minimal blood loss was selected for because it promotes survival of mother and newborn.

PPH is conducive to infection and the attraction of predators.   No mammals, other than humans, experience PPH. Even mammals with the exact same placental attachment as humans, such as chimpanzees and great apes do not experience PPH. (9,10) A search on Pubmed for ‘veterinary postpartum hemorrhage’ provides cases of PPH only among captive animals whose births were tampered with by humans.

A prospective, observational, interventional, multicenter study including all births attended by a single practitioner over a 20 year period, 1998-2018, in Israel.  Inclusion criteria: a minimum of 35+5 weeks of pregnancy, the absence of placenta previa, the absence of breech presentation with estimated fetal weight over 3200, and desire of attended homebirth.    Since nothing was done to any woman and this protocol involves no side effects or untoward effect, IRB approval is unnecessary. After explaining that squatting at 4 minutes eliminated PPH at all previous births of the practitioner, all women wanted to minimize their postpartum bleeding and squat.

Method: Judy’s 3,4,5 minute third stage protocol: At some point during labor, the practitioner squats in front of the client to demonstrate how the client will get into squatting at 4 minutes postpartum and deliver her placenta 5 minutes after the birth. Clients who are unable to replicate a squatting position are told to do as best they can.  At the birth, immediate continuous skin-to-skin contact with the baby is initiated for the first 3 1 ⁄ 2 minutes postpartum. If the mother gives permission, the cord is cut at 3 1/2 minutes postpartum. Since all cords have stopped pulsing by 3 ½ minutes except where the cord is surrounded by 37 degree C. air or water, it is explained to the clients that there are no drawbacks to cutting the cord at 3 ½ minutes and that cutting the cord at 3 1/2 minutes makes it easier for the woman to get into squatting by 4 minutes and squatting at 4 minutes will reduce the risk of PPH. It is explained to her that the more expediently she squats, the less blood she loses. If the cord is cut, the baby is handed to someone or placed for one minute near the mother, kept warm by covering the baby well. If the client insists on not cutting the cord, the baby is placed at the feet of the mother, attached to the cord. At 4 minutes: The practitioner verbally directs the mother into a squatting position. The practitioner encourages the woman to push out the placenta without a contraction. It is helpful to say things like: “the placenta is right there, ready to deliver! Just give a push!” The woman pushes and births the placenta. The practitioner keeps hands off the woman as well as the cord except if the client is high risk of hemorrhaging, such as a woman with very low platelets or history of previous PPH. In such high risk cases, cord traction may speed delivery of the placenta, reducing blood loss. The time of delivery is noted. Immediately after delivery of the placenta, the mother lays down,  a sanitary pad is given or placed on the mother and she is immediately given the baby. The uterus is massaged once soon after to check for clots. If one cup or 200 cc of bleeding is estimated for the first 10 minutes postpartum, a shot of either 10 u Pitocin IM, 0.2 mg Methergine IM or Methergine 0.125mg PO are given, depending on the amount of bleeding. Early suckling at the breast is initiated, which generally takes place between 10 and 45 minutes postpartum depending on the baby. For first 400 cases, blood loss under one cup/200 cc was estimated. Blood loss over a cup was measured in a measuring cup. After the first 400 cases, there was no longer need for measuring blood loss in a measuring cup.

The woman squatted by 4 minutes postpartum and delivered her placenta herself in nearly all cases. One 150 kg woman remained laying down, unable to squat. When first learning the protocol, it is typical to do cord traction rather than doing nothing if the placenta does not deliver quickly, but with experience, one learns that cord traction is rarely needed.

The woman who lost 800 cc in the first 45 minutes after birth, as measured in a measuring cup,  was a woman who continuously began screaming after the placenta delivered that she wished to die because her brother had just been murdered by terrorists. After 45 minutes when she stopped screaming, the bleeding stopped as well.  Four women stayed in squatting from 4 minutes to 25 minutes trying to push out the placenta. At 30 minutes a manual removal of the placenta was performed. In two of those cases, the placenta was partially attached to the wall, in the other two cases, it was separated completely and sitting just inside the cervix.

After birth, women generally are tired but  with minimal encouragement, they get into squatting.  Some women find it empowering to deliver the placenta rather than have it pulled out while lying supine.   Gravity assists in delivering the placenta and membranes such that trailing membranes is a rare phenomenon.   The bonding period is longer and less disturbed compared to active management because of the decrease in PPH and the management it entails. Judy’s 3,4,5 can be easily be taught by demonstration without the use of language, so there are no language barriers to using this protocol.